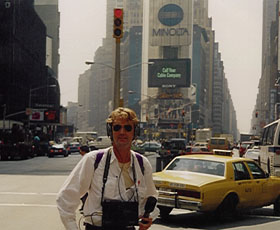 The composer records his 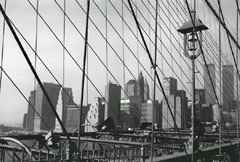 My Second Symphony is an ode to New York:  not strictly programmatic music but rather a musical interpretation of the spirit, glamour and indifference of one of the most fascinating cities in the world. The first movement, (Skyline) depicts the massive facade, the ‘global’ contours of New York; in the second movement (Gotham) the brutal, chaotic aspects of the metropolis are introduced. Listening to this symphony is perhaps as enervating as an actual visit to Manhattan.  The listener is scarcely granted a moment of calm:  even the more subdued passages are invariably accompanied by an obstinate rumbling in the background - the music never really quietens down...

The Big Apple
The name The Big Apple was often used during the twenties by jazz musicians:  if you managed to play in the New York jazz clubs you had made it, you had the ‘Big Apple’ in the palm of your hand!  Today, however, the bright red apple functions as a symbol of the city:  a welcome object in the souvenir shops, where post cards, pencil sharpeners, T-shirts and posters depict in countless variations this trademark of New York. The subtitle of the second movement, Gotham, is another nickname for the city.

Time Square Cadenza
My initial plan of writing a three movement symphony with a slow middle movement  was soon abandoned since this was not in keeping with the frenetic energy, turmoil and the accelerated pulse beat that I always feel during my visits to the Big Apple.  To preserve the tension between the two movements the idea emerged of a non-musical intermezzo: Times Square Cadenza, a compilation of city sounds I personally recorded, which links the two movements of the symphony together into a single uninterrupted whole.

Brief Musical Explanation
The musical language running through the entire work is robust, angular and straightforward, unencumbered by depth or philosophical reflection.  The symmetry of the New York street map together with the massive architecture of the skyscrapers provided the structure of the thematic material.  For me, composing this work was both an exploration of various musical styles as well as a tribute to Aaron Copland, John Adams and Leonard Bernstein.
The syncopated, restless interval structure of the first theme on the horns, known as the Skyline Motif, follows the contours of the impressive silhouette of the Big Apple.  From this motif all other themes are distilled, such as the extended melodic lines on the English horn, later joined by oboe and piano, and the massive sound blocks played by the brass.  The whole is surrounded by repeated accompanying figures on the woodwinds, piano, harp and mallets:  a jumble of lights and the on-and-off flicker of neon signs.

The recurrent use of these repeated sound patterns bears a certain resemblance to minimal music, and there are also rhythmic influences of such musical styles as jazz and ragtime. The addition of a harpsichord is not the most obvious alternative in this context, but it is precisely the rigid, hammering nervous system of this instrument that fits so well into the orchestration.

The theme of the second movement is based entirely on the opening motif played by the brass; all possible manifestations of this four-tone motif are then used, in the accompanying figures as well as in the theme itself, including an extended dialogue (or duel?) between the timpani and the roto-toms.  Apart from this, the second motif, which begins with an octave jump, provides the remaining musical building blocks.  As the symphony concludes, a contrapuntal form of the Skyline Motif returns from the first movement.

Symphony No. 2, The Big Apple was commissioned by The United States Air Force Band in Washington D.C., on the initiative of its commander and conductor, Lieutenant Colonel Alan L. Bonner, and was composed between October 1991 and September 1993.  The official premier performance was given in March 1994 during the American Bandmasters Association Convention and the Pacific Basin Music Festival in Honolulu, Hawaii.  The Dutch premiere was played by the Amsterdam Wind Orchestra conducted by Heinz Friesen in Muziekcentrum Vredenburg, Utrecht on 20 February 1994.

The Big Apple was a finalist at the 14th International Composition Competition in Corciano, Italy (1993) and was awarded an honourable mention.

My Second Symphony is dedicated to my parents.