Sinfonietta No. 1 (for brass band) 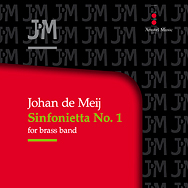 After Extreme Makeover, Sinfonietta No. 1 is my second original composition for brass band. Both works were commissioned for major competitions. Extreme Makeover was written for the top division of the European Brass Band Championships 2005 in Groningen - The Netherlands. Sinfonietta was composed for the 3rd division of the Dutch National Championships 2011, also held in Groningen. It also served as the test piece for the 3rd division of the Swiss National Championships 2011 in Montreux, Switzerland.
Unlike most of my compositions, Sinfonietta No. 1 is an abstract, non-programmatic work. It consists of three movements, in which the thematic material of the opening measures – an upward fifth jump – returns in various shapes and forms throughout the piece. The slow middle section features solo passages by E-flat tuba, flugelhorn and euphonium, all starting with the same fifth jump. The final movement presents an Elgar-like march theme, interspersed with quotes from the second movement, and ending with the opening theme of movement I.