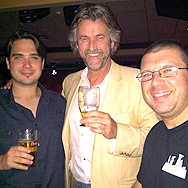 Having a toast with the two soloists, Jason Ham (r) and David Childs

UFO Concerto, my first solo work for euphonium and wind orchestra, is not a traditional concerto in the classical sense. It consists of five movements that are thematically related to one another. The opening chord may sound familiar to some listeners: This chord and the first theme are based on the same five-note chord used in ‘Extreme Makeover’ and ‘Planet Earth’ in 2005: a major triad with an added 4th and a 7th. This chord has been obsessively present in my head ever since -- I could not resist using it again! Both the chord as well as the main theme make appearances in various shapes and forms throughout the entire piece.

Jason Ham, solo-euphonium player with the West Point Band (USA), initiated the consortium for UFO Concerto. He performed the world premiere on February 15th, 2012 in Baltimore (MD) with the Peabody Wind Ensemble, conducted by Harlan Parker. Jason also invited British virtuoso David Childs to join the consortium and play the European performances. At the request of both players, I also made a version for euphonium and brass band. David premiered this version with The Cory Band, conducted by his father Robert Childs at the 2012 RNCM Festival of Brass in Manchester, and recorded the wind version on CD [Extreme Beethoven] with the Banda de Lalín.