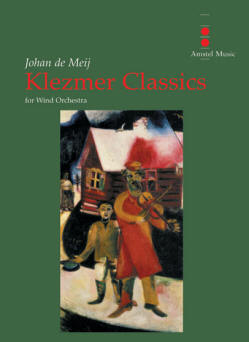 Listen and watch the score with ScorePlay: click HERE

Klezmer is the traditional instrumental music for weddings and parties of the Yiddish speaking Jews of Eastern Europe. Its origin goes back to the sixteenth century. The Yiddish culture was at its peak in the countries where the Jews then lived: Poland, Ukraine, Byelorussia (White Russia), Latvia, Lithuania, Moldavia, Romania, Slovakia, and Hungary.

The Yiddish word klezmer (plural: klezmorim) stands for musician (after the Hebrew “kele zemer,” which means instrument of the song). It is connected with the professional Jewish musicians of Eastern European origin who played this music. Since the 1970s, when America started a revival of this music, the word has been used for the music style itself. Johan de Meij arranged five classics from the klezmer repertoire into a colorful selection:

1. Mazltov
In times past, this melody was used for the farewell as a so-called dobranots (“good night song”) to escort the guests on their leave-taking at a wedding party.

2. Dem Trisker rebn’s nign (The Melody of the Rabbi of Trisk)
This melody was first recorded in 1925 in New York by the clarinetist Dave Tarras. The title (Trisk is a town in the Ukrainian province of Volhynia) responded to the sentiments of the many Jewish immigrants who had settled in America. They formed a potential market for the upcoming record industry.

3. Lomir zich iberbetn (Yiddish: Let Us Reconcile)
This is a traditional wedding dance. It is performed at the party by unmarried girls and boys who, to avoid physical contact, were only connected by a handkerchief that they held at the tips, high up in the air.

4. Chosidl
This is a Chassidic dance with a solemn mood. The melody is based on a nigun (Chassidic melody without words). Chassidism is an orthodox movement within the religious Judaism, in which mysticism plays an important role.

5. Ma yofus (Hebrew: How Beautiful…)
This is a melody based on an ode to the Sabbath. It is a true classic from the klezmer repertoire, and it is also known as Tants, tants, Yidelech. In former days in Eastern Europe, Ma yofus was just as well known as Hava Nagila is today.