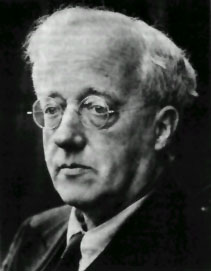 Just like his friend and fellow composer Ralph Vaughan Williams, Gustav Holst (1874-1934 ) had a strong preference for the abundant folk music of the British Isles, which is particularly noticeable in his “Second Suite” (in F) for Military Band  (1922)  but also in his “St. Paul’s Suite”  for string orchestra. This opus was completed in 1913 and was especially composed for the school orchestra of St. Paul’s Girls’ School in the London borough of Hammersmith, where Holst was appointed Director of Music in 1905, a post he was to hold until his death in 1934. It is striking that Holst was to orchestrate the last part of this suite, “Fantasia on the Dargason” (in which the ‘Greensleeves’ theme is ingeniously dealt with) anew as the finale for his “Second Suite”.

The “St. Paul’s Suite” opens with an exuberant “Jig”, a dance originating from Scottish and Irish folk music in alternating duple and triple time (mostly 6/8 and 9/8), sometimes called “Gigue”.