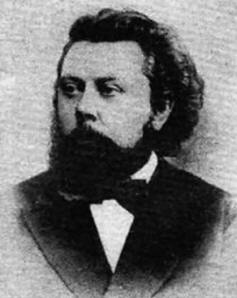 Modeste Moussorgsky (1831-1881) became especially known as a composer of songs and operas with medieval Russian history as a subject. With his opera Boris Godunov, his orchestral work Night on Bald Mountain, and his piano cycle Pictures at an Exhibition he acquired world fame, even though until recently, the versions of the known works by Moussorgsky were mostly completed after he died, and were adapted by colleague-composers. Nowadays the original scores are sparsely available for performances again.

In the time of the first presentation of Boris Godunov (an opera that got bad reviews but quickly became very popular with the audience), Moussorgsky began working on his opera-ballet Mlada, a combined project of several great Russian composers: César Cui, Nikolai Rimsky-Korsakov, Alexander Borodin, and Modeste Moussorgsky, all members of the so-called ‘Mighty Handful’, and Ludwig Minkus, who would provide the ballet music. Ultimately, the production of Mlada unfortunately fell  through, and the collective opera was never performed. Like the other composers, Moussorgsky used material from the opera in other works – for example Night on Bald Mountain, which was originally meant to be a choir movement for Mlada. In addition, the festive march from Mlada assumed a life of its own after the cancelled project – in the orchestration by Rimsky-Korsakov, that is – but up to now has been one of the less-known works by Moussorgsky. Thanks to this arrangement for concert band, this festive opening piece will be heard a bit more often.