Empire of Light (from The Venetian Collection) 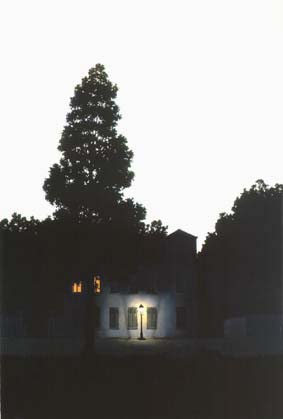 EMPIRE OF LIGHT by Johan de Meij is the final movement of THE VENETIAN COLLECTION, a colourful suite in which De Meij depicts four different paintings from the Peggy Guggenheim Museum in Venice, Italy.

EMPIRE OF LIGHT is inspired by the painting with the same name by Belgian surrealistic painter René Magritte [1898 - 1967]. Magritte is, together with James Ensor, Constant Permeke and André Delvaux one of the most important Belgian painters of the twentieth century. He was a very versatile and productive artist, creating more than eleven hundred paintings and seven hundred gouaches. Additionally, he designed posters and illustrated several scores.

EMPIRE OF LIGHT was commissioned by a consortium of nine university bands, united in the Atlantic Coast College Band Directors Association [ACCBDA].

The other movements of THE VENETIAN COLLECTION are respectively: VOICE OF SPACE [La Voix des Airs], also by René Magritte, THE RED TOWER [La Torre Rossa] by Italian artist Giorgio de Chirico and MAGIC GARDEN [Zaubergarten] by Paul Klee. All four of the paintings are on display at the Peggy Guggenheim Museum in Venice. Together with other outstanding museums in New-York, Bilbao and Berlin, this collection is part of the Solomon R. Guggenheim Foundation, one of the largest private art collections in the world.

In November 2000 THE RED TOWER was awarded the 1st Prize at the International Composition Contest of OMAN.