Journey in the Dark (part IV from Symphony no. 1 The Lord of the Rings) 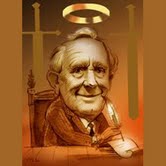 IV. JOURNEY IN THE DARK
The fourth movement describes the laborious journey of the Fellowship of the Ring, headed by the wizard Gandalf, through the dark tunnels of the Mines of Moria. The slow walking cadenza and the fear are clearly audible in the monotonous rhythm of the low brass, piano and percussion. After a wild persuit by hostile creatures, the Orks, Gandalf is engaged in battle with a horrible monster, the Balrog, and crashes from the subterranean bridge of Khazad-Dûm in a fathomless abyss. To the melancholy tones of a Marcia funèbre, the bewildered Companions trudge on, looking for the only way out of the Mines, the East Gate of Moria.