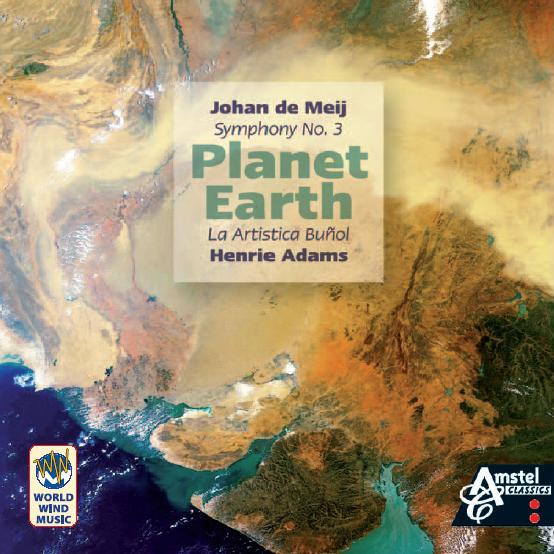 Anthony Fiumara in conversation with the composer

When Marcel Mandos, artistic director of the North Netherlands Orchestra (NNO) approached Johan de Meij with the request to write a symphony for his orchestra, the composer always immediately knew what this new work would be about. His first symphony, The Lord of the Rings, has the trilogy of the same name by Tolkien as a guiding principle; his second symphony, The Big Apple, is an homage to New York City. In fact, this latter symphony was magnificently recorded on CD by the NNO conducted by Jurjen Hempel (QDisc 97035).


The third symphony, like the second, has also become an ode; not to a city or a region, but to the entire earth in all its miraculous beauty and appearances: Planet Earth. About his inspiration by extra-musical ideas such as cities, paintings or planets, De Meij states: “I always try to prevent my work from becoming ‘story-telling music’. I like evoking images, but I mostly try to find it in abstractions. And I keep looking for new roads to follow. In my third symphony, the musical language and method I’ve used differ from the first two.”


Still, Planet Earth shows clear similarities to The Big Apple – for example, the use of electronic sounds. “The recorded city sounds in The Big Apple were a sort of heralds of the electronics that I use in the third, continuing the attainments of the second symphony rather than those of the first symphony. I use the extra-musical framework not so much programmatically but rather as a guideline, as a metaphor. When I think of motifs and fragments, I immediately know if they fit the framework or not. If they don’t, I save them for another piece.”


Interestingly enough, devising his notes with De Meij is part of abstract processes; the lush-abundant result is often based on just a few principles. For instance, in his third symphony, De Meij  has used two triads that interlock on the piano keyboard: “I enjoy limiting my material to a handful of tones or chords and see what I can achieve with them. I always have to seek out these motifs or cells: they arise gradually. At a certain moment I start to see structures and variants in the few notes. From my intuition I develop certain motifs. Sometimes you plant such a seed and nothing comes out of it, but another motif can suddenly turn out to be a huge source of ideas.”

Planet Earth is the first symphony that De Meij composed directly for symphony orchestra: his first two symphonies and his cello concert Casanova were originally written for wind band, and later orchestrated. However, De Meij has always seen himself as a symphonic composer, because while his instrumentation is for wind players, the classical symphony orchestra has always been the guideline.


Because of the title, De Meij’s third may remind us of The Planets by Gustav Holst. In that work the composer ‘deals with’ all planets, except the Earth. De Meij: “In Planet Earth I continue where Holst stopped. Not just in a figurative sense, but also literally: where The Planets ends with a six-part female choir and a large orchestra, I open my first movement (titled Lonely Planet) with a similar instrumentation and atmosphere. After that, any comparison to Holst ends.”


Now that we have mentioned the opening movement, we approach the ‘lonely planet’ through a big bang that launches us into the universe. The comets and planets are all around the listeners in the opening part, through speakers that are placed around the audience. For those electronic sounds, De Meij has used the expertise of Joris de Man, who knew perfectly how to transform his wishes and fantasies in impressive extraterrestrial and eccentric sounds.


De Meij had further assistance when he discovered through the grapevine the ancient Greek Homeric Hymns, of which he used the ode to Mother Earth (Gaia in Greek) in the closing movement of the symphony, titled Mother Earth. “This ancient Greek was exactly what I was looking for,” says De Meij. “A classical text that I could use abstractly, but that intrinsically sings the praises of the life energy of the earth. Classicist Dr. Adriaan Rademaker has helped me placing the text below the notes; he turned out to be well-versed in music as well.”


The symphony ends with this cantata and a finale in which the composer pulls out all the stops. All musicians contribute to this hymn and brilliantly bring the symphony to a close; however, in the meantime a lot has happened. Out of the cosmic waste of Movement I, the second movement, Planet Earth, makes room for a pastoral, aerial view of the beautiful landscapes of our planet. De Meij: “In the second movement you hear the ‘big tune’ for the first time, a heroic unison melody in six horns from which much material is derived, each time in a different form and context, throughout the whole symphony; an endless hymn sung lustily, with which Homer was ahead of me thousands of years ago: ‘I will sing praise of the Earth, mother of all!’”

Speaking of praise: with reference to the première in De Doelen, Rotterdam, the Dutch press was profuse in superlatives about Planet Earth. De Volkskrant headline: “Compelling symphony by Johan de Meij lifts NNO to a great height” and reported: “Although the three movements together cover three-quarters of an hour, and for the most part is based on a pendulum motion of two major chords, it is an intensely stirring work – owing to a fantastic sound, from the electronic primeval thundery sounds at the barren, empty beginning, up to the heroically driving final boisterous sounds. Only a film screen with credit titles is missing.”

The daily newspaper Trouw wrote: “On Thursday evening De Meij’s première was grandly performed by the North Netherlands Orchestra (NNO) and the North Netherlands Concert Choir, conducted by Otto Tausk. The NNO has a reputation in this field.... De Meij knows how to compose, and he knows how to produce an effect. The audience in De Doelen gave him an enthusiastic applause afterward... To quote the Dutch writer Annie M.G. Schmidt: ‘What a planet!’”

Gaia Hymn
I will sing of well-founded Earth,
mother of all, eldest of all beings.

Hail mother of the gods, wife of starry Heaven
freely bestow upon me for this my song
substance that cheers the heart!

Through you, O queen, men are blessed in their children and blessed
in their harvests, and to you it belongs to give means of life to mortal men
and to take it away, O Gaia!