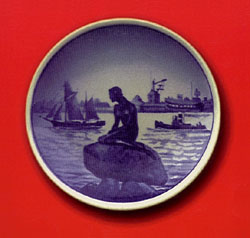 2. The Journeying Storyteller: Europe by Railway
I: The Train Station.
II: Full Steam Ahead!
In one of his numerous travelogues, Andersen shares his awe-inspired, almost childish infatuation with the recent wonder of technology - the railway! A man used to bitter blisters and bumpy carriage rides, Hans Christian Andersen clearly saw the steam-engined train as a blessing. This hybrid movement is a free depiction of the writer’s enthused notes, carrying you from a local train station through southern Europe and all the way to the exotic landscapes of Near- and Middle East.

3. The Little Match-Girl
In one of Andersen’s saddest and most beloved short stories, a young child on New Year’s Eve desperately tries to sell a few bundles of matches. Ignored by the busy citizens, the little girl fantasises about warm lodgings and rich food; in the flare of her matches, she has a vision of her old grandmother in Heaven, which is soon to be welcoming a new soul as the last match fades away...

4. Constantinopel: A Poet’s Bazar
“A Poet’s Bazar” is one of Hans Christian Andersen’s most contagiously uplifting books. In short, his portrayal of the marketplaces of Constantinopel (now known as Istanbul) is one of great romanticism and poetry - and very little realism. Like a child in a candy store, Andersen describes the smells of exotic teas, incense, and spices. Thus, rather than staying anywhere near loyal to indigenous Middle-East harmony, I wrote this lively piece more in tradition with theatrical ‘Hollywood’ conventions, airing on the way more than one clichéd preconception about Arabian Nights or Persian Markets...

5. Dream Waltz [The Poet and “The Swedish Nightingale”]
Much has been written and speculated about the romantic life of Hans Christian Andersen; little derives from his own log-keeping, but his obsession with famous soprano Jenny Lind is undeniable. A true mega-star in her own time, Ms. Lind was affectionately referred to as ‘The Swedish Nightingale’ and lent her title as a primary inspiration for Andersen’s Chinese fairytale. The poet regarded himself clumsy and not at all a ladies’ man; I could not help visualising the poet and his singer of dreams in a grand ball-room, him trying to lead his belle but invariably stepping over his own big feet in what becomes more of a nightmare. Hence, I hope you will find yourself in a sort of musical maze here - always looking to put the right foot down at the right beat and frantically searching for romantic grace and harmony. Have you ever waltzed in 7/8 time?

6. The Tinder-Box
I: The Soldier’s March
II: The Old Witch; The Giant Dogs “With Eyes Big As The Round-Tower”
III: Hex Beheaded!
A Danish rendition of the story of Aladdin and His Wonderful Lamp, Andersen lit up the hearts of his fellow-Danes with his Tinder-Box, the story of a cheerful soldier tricked by a mean old witch to descend into a hollow tree and retrieve her old Zippo. The soldier charms his way past the three mean watchdogs but eventually decides there must be something to that old tinderbox - and bluntly chops of the witch’s ugly head! This is only the opening of a wild romp of a tale. But why tell the rest of such a well known story? - If you don’t know the ending - GO READ IT!