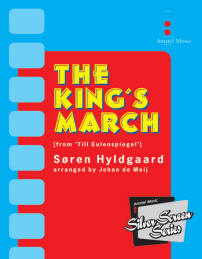 Writing music for an animated adventure romp like Till Eulenspiegel is about as much fun as I can imagine having as a composer. While extremely challenging on the timing and hitting-the-action side, the furious universe of the animated adventure genre is as much an inspiration as it is an obstacle. The very character of Till, Europe’s mythical prankster with well over 800 years of accumulated fame to his credit, calls for over-the-top and minutely timed, ‘mickey-moused’ action music.

Focusing first on Till’s Theme and later King Rupert’s theme, The King’s March from Till Eulenspiegel captures the high spirits of the film itself. The town of Boomstadt is expecting a royal visit, but Till has convinced the eight year old King to let Till himself appear as the young monarch to protect him from evil plotting. And thus, the royal carriage and the extravagant entourage arrive in Boomstadt -- with all the Pomp and Circumstance...